Posted on November 11, 2015 by The Common Wanderer 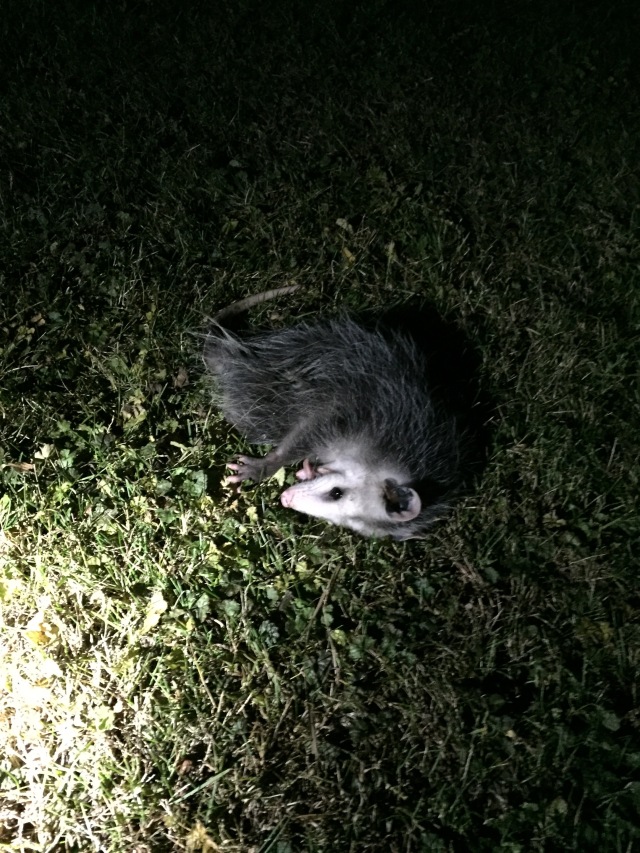 This is a possum, doing what possums do. 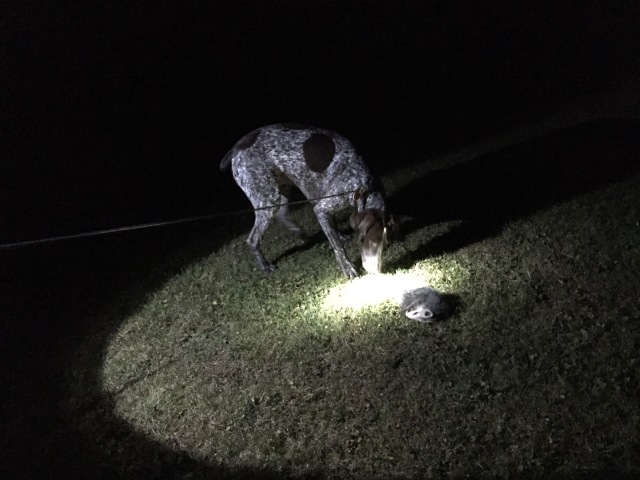 And this is Oliver, who sent the baby possum into fake rigor mortis. Oliver surprised the creature but hadn’t so much as nudged it when the possum flopped down and started playing dead. Its tongue was even hanging out.

A late night excursion proved the possum was safely gone.

This is the second time I’ve seen a possum play possum. It’s kind of amazing that it works. (The leash probably aided in the survival chances, too, though Oliver’s not really a killer.) 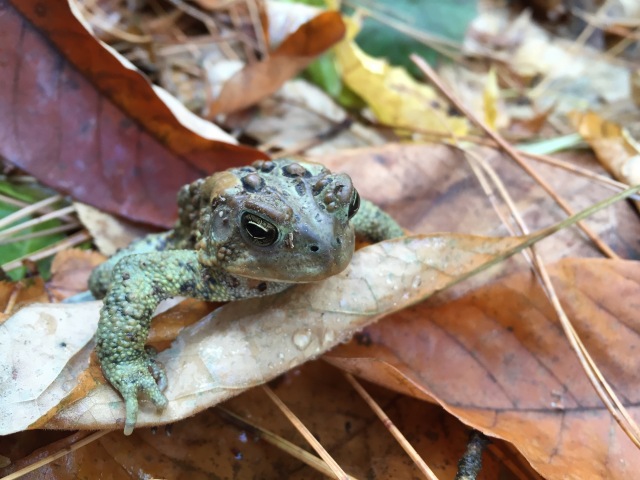 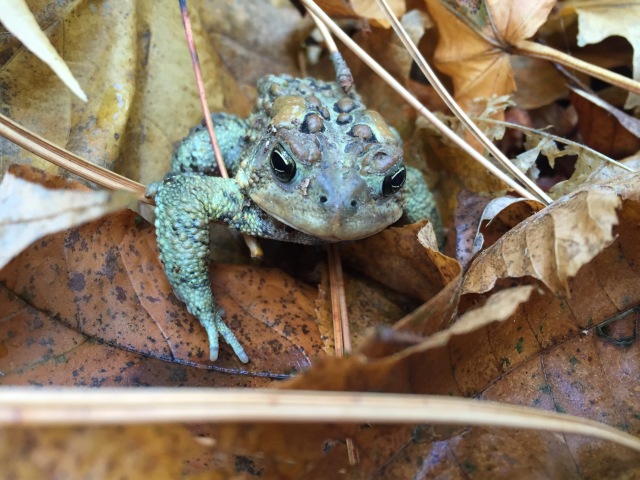 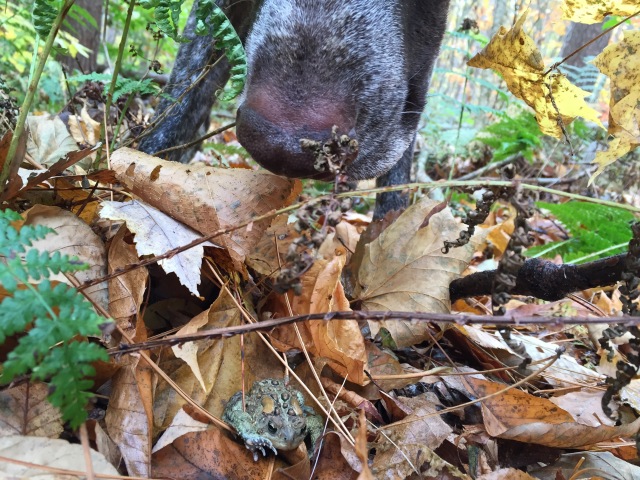 Picked Up A Hitchhiker This Morning

Posted on October 6, 2015 by The Common Wanderer 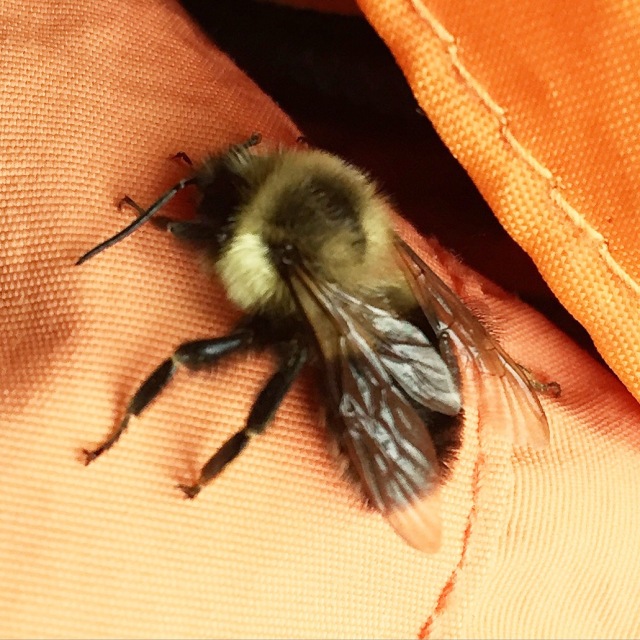 It rode with us all the way to daycare, where Dylan and I dropped it off on a nearby flower. 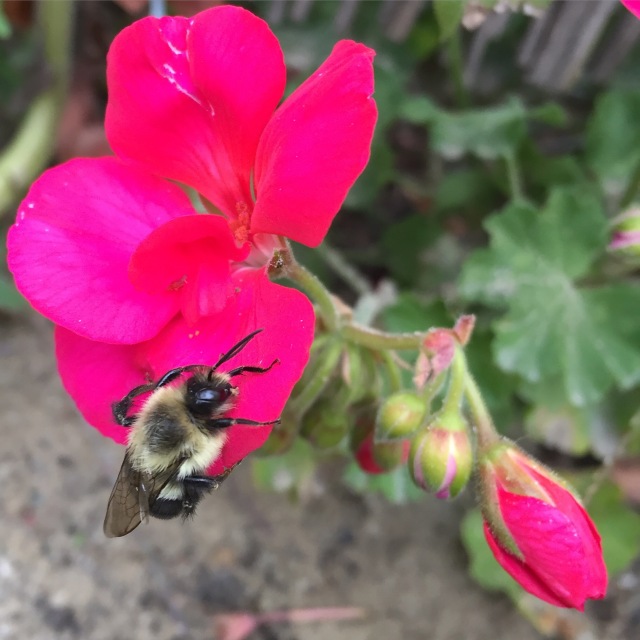 Posted on October 6, 2015 by The Common Wanderer

A trail/road hybrid squeezed into a busy day. I’ll take ’em where I can get ’em! 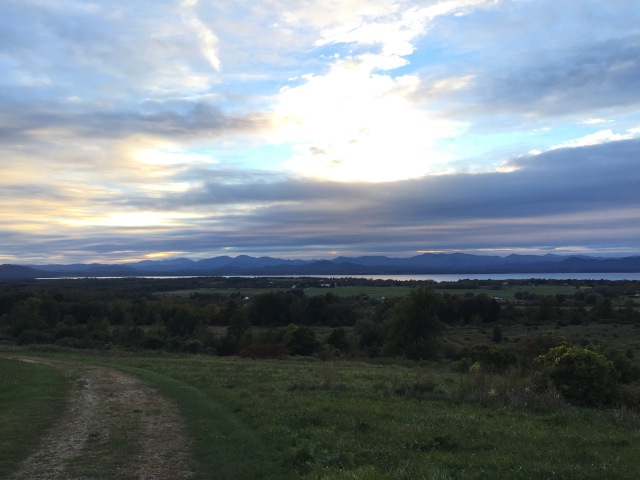 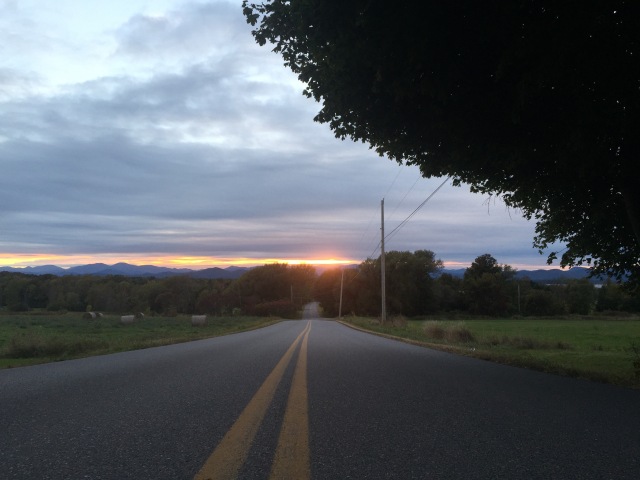 And with these views, the run was doubly rejuvenating!

Posted on October 3, 2015 by The Common Wanderer 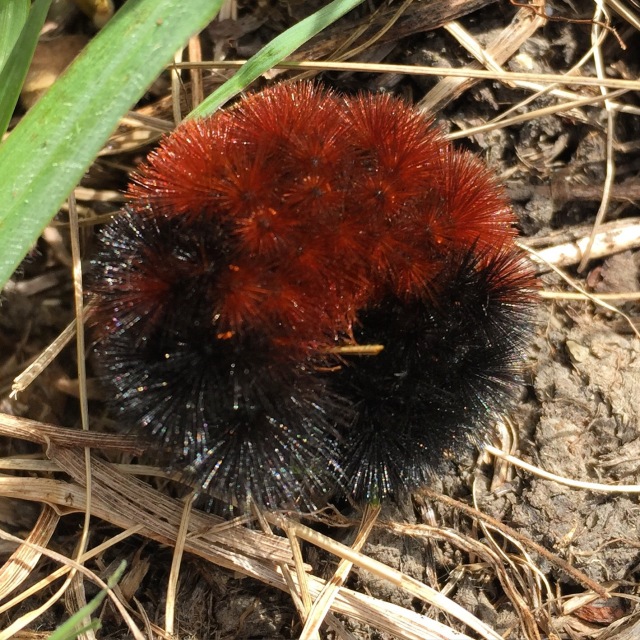 Along with the colder weather and beautiful foliage, fall brings the wolly bear caterpillar.

As a kid I believed these were going to turn into monarchs. I think I assumed the colors on the caterpillar foretold the colors of the butterfly so it made sense in my head.

Actually, the wolly bear grows up to become the Isabella tiger moth. But not before spending the winter frozen solid! These hardy caterpillars overwinter in our region in logs and piles of leaves. They dehydrate themselves before hibernating. And their circulatory system produces a cryoprotectant, a substance keeps their organs protected from freeze-damage. But otherwise they are little wormsickles until they thaw out in the spring.

In warmer climates they can complete their whole lifecycle–from egg to larval stage (caterpillar) to pupating (in the cocoon) to emerging as a moth–in one summer. But in Vermont, our warm seasons are just too short. So they spend the winter in suspended animation until they can thaw out in the spring and get a wriggle on.

This woolly bear had just been picked up by a toddler (not mine; mine prefers hands-off observation, unlike his mum), thus the tightly curled ball. But you can still see that it’s pretty rusty in the middle. Folk wisdom says that means we’re going to have an easy winter. The more orange on the wolly bear, the milder the winter.

Rather than dispute the wisdom of my forebears with actual science, I’m going to take heart in the promise of fewer arctic days and nights, fewer times plowing the driveway and shoveling a path to the garage, and a lower heating bill.

And I’ll keep an eye out for the wolly emergence and quick transformation to tiger moth in spring. Which will be coming early; this little guy told me so. 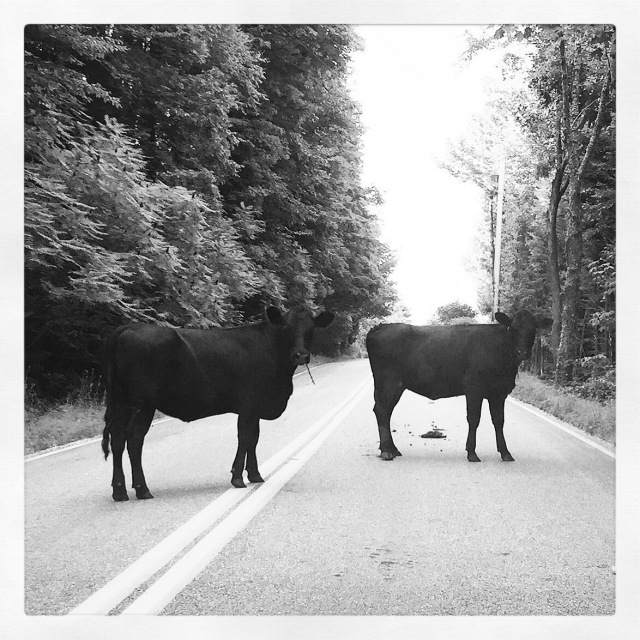 Even on a classroom door at pick-up time. 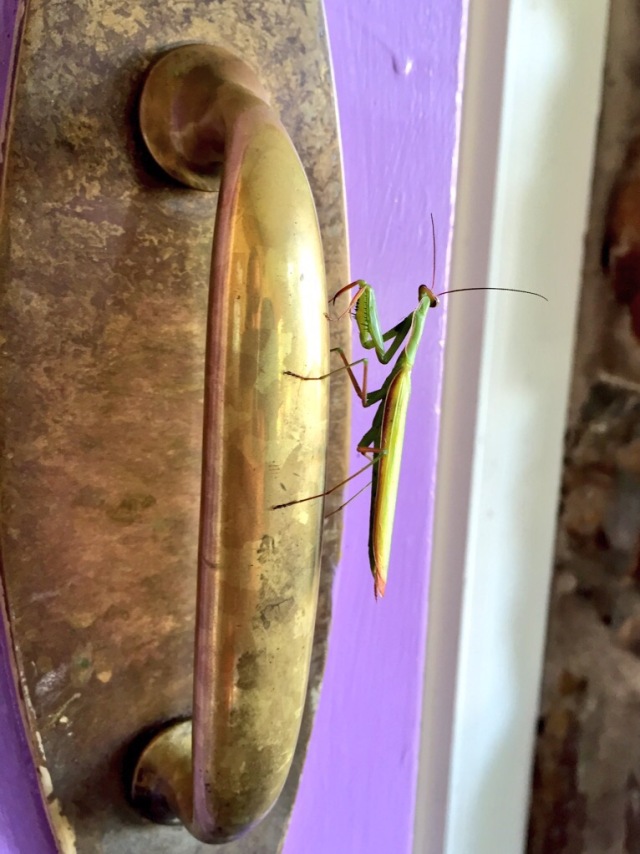 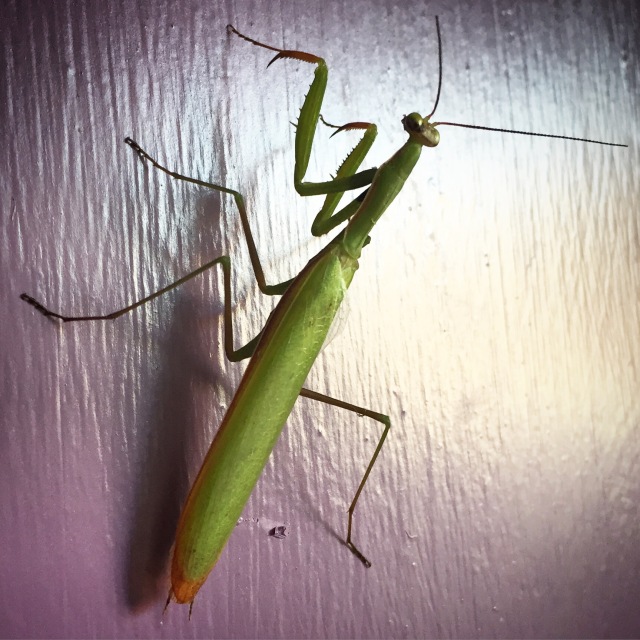 Return To The Wild 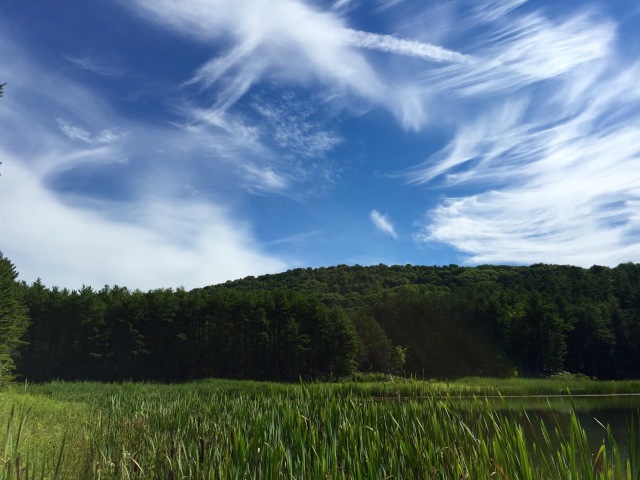 While you can’t see it in the picture, I saw a bald eagle here over the weekend. As I crossed the top of the pond at the local (defunct) reservoir, the bird swooped across the water. Here’s how my brain processed the event: “Wow, that is a HUGE crow…with a white tail…oh, wait; that’s not a crow.” The eagle perched in a tree at the edge of the water at the far end of the pond and Dylan and I watched it for a little while before continuing along our walk.

I know that bald eagles are back in the United States in a healthy way, and have finally resumed breeding in Vermont in smaller numbers. But it’s still a thrill to see such a large wingspan within a few miles of my own house.

I’ve been on hiatus from this blog for the past year, trying to figure out how to balance work and parenthood. It’s harder than I thought. And one of the parts of my life that has suffered the most is the time I used to spend alone (with Oliver) in the woods. That and finding or taking the time to go running, which was often the same thing.

But what is really fun is getting to rediscover all the amazing things about the world right around us, through Dylan’s eyes. And being able to pass on almost embarrassingly gleeful feelings about seeing things like salamanders or birds nests. 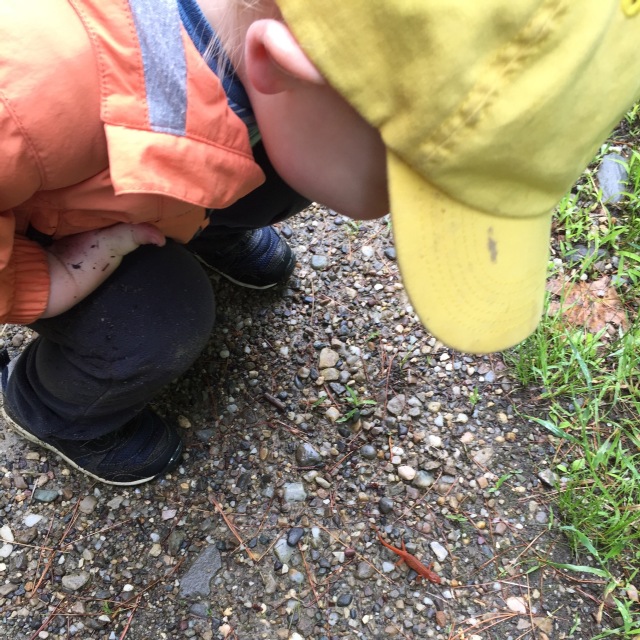 Last weekend I got to show him how snapdragon seed pods will burst and curl up in your fingers when you touch them. (I grew up calling the plants snapdragons, but I understand they’re more commonly known as jewelweed, or even touch-me-nots.) What fun to see Dylan feel the exploding seed pod between his own fingers! 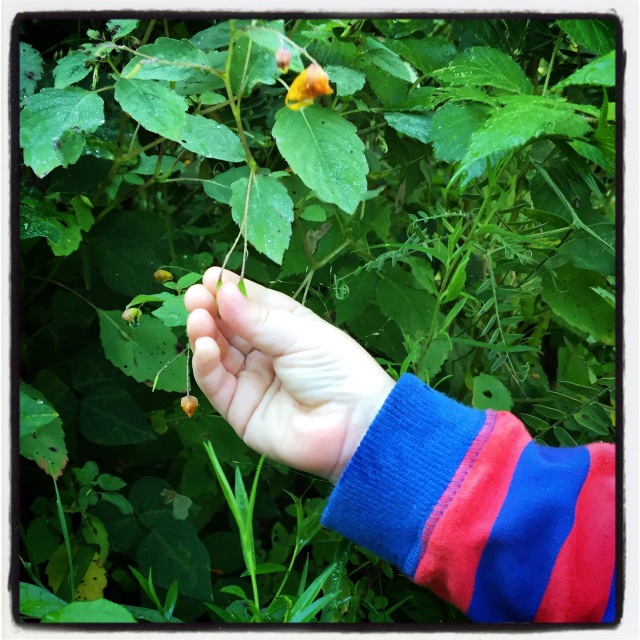 And who doesn’t like being able to laugh and feel goofy with someone who finds you hilarious (except, of course, for the times when he thinks you’re the worst, like when you want him to put on–or take off–his shoes, for example)! 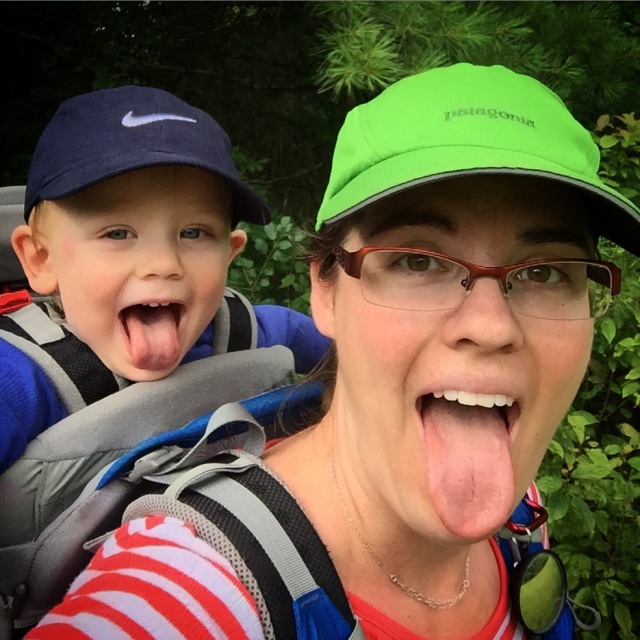 So I’ll continue to try to find the time to get outside on my own (and to remove any guilt I might have about taking time for myself). But in the meantime, I’m loving the joy and wonder I get to experience together with this little Vermont kiddo. 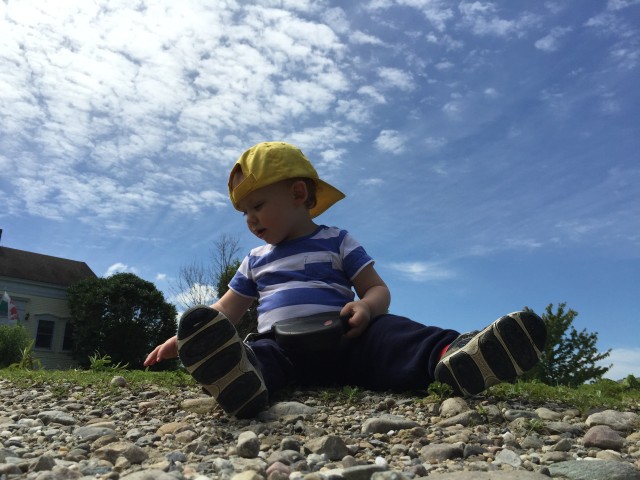 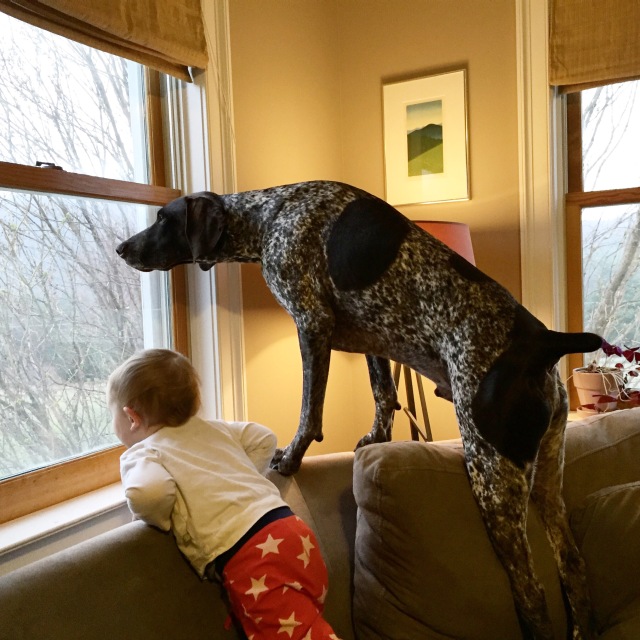 August 30 – Out of the Wilderness

Posted on September 1, 2014 by The Common Wanderer

Wow. It has been so fun to share this adventure as the Kallin family thru-hikes the AT. I even got a chance to meet up with them while they were crossing through Vermont and we shared a nice lunch. Dave and I reminisced about our college days and they all got to meet baby Dylan. I’ve been reading Dave’s wonderful posts on their blog all the way through their journey. It is coming to an end now as they hike the last few miles. What an inspiring family and what fun to be able to travel with them vicariously.

The Hundred-Mile Wilderness may be an historical name designation only (it is not true wilderness in either the sense of the 1964 Wilderness Act or in true remoteness, being accessible by several private logging roads). But it does have psychological import for thru-hikers nearing the end of their journey. After a Katahdin sunrise, we walked out of the wilderness to meet Mama Bear’s parents for the final few miles of the trail.

For the past several months I’ve been following the adventures of my friend Dave and his family as they thru-hike the Appalachian Trail together. What a wonderful way to still feel connected to adventure and nature while my explorations have been somewhat curtailed. On Friday I was able to meet up with them in Southern Vermont where the trail crossed a road. I brought them a picnic and caught up for a couple of hours before they shoved off to hike up Killington.

Dave has been blogging the whole trip. His posts are wonderful, full of humor, insight, and character. They’re well-worth perusing.

Today was the last day that we would follow the Long Trail, before the Appalachian Trail turns east while the country’s first long distance trail continues north to the Canadian border. Back in the last century, years before I met Mama Bear, my first long distance trip was along that trail. Traveling alone, I met a French Canadian with whom I walked for about a week. Our conversations had a certain poetry stemming from the combination of my broken French and his broken English. He described to me how he had found himself in Vermont’s Northern Kingdom: “For my heart; it was in need of a journey, and so I am here.”